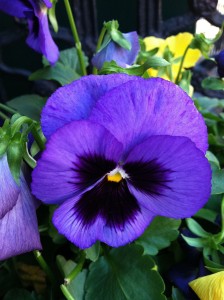 Move over, chrysanthemums! There’s a new fall flower in town—pansies—or so my neighbor Jane informed me a few weeks ago. I have always adored pansies with their cheery faces. When I was a child, we had an entire flower bed filled with them in the spring. To a kid whose head was full of storybook tales, it wasn’t hard to imagine the dark part in the middle as a little face, surrounded by a colorful cap. We had hundreds of them in the garden, in dozens of hues—a nursery garden full of friends that I could imagine laughing and smiling with me on a beautiful day. 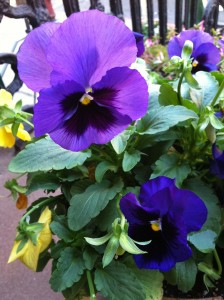 This year I missed out on the spring pansy season, because I didn’t start my container garden until June. But now I have a second chance. It seems that cool weather is cool weather to a pansy, no matter what month it falls in, and one equinox is just as good as another. There are even varieties of pansies that are specially bred to overwinter in mild climates or bloom until snowfall in colder ones. “Don’t plant them until the hot weather is over,” Jane advised. So once my husband and I decided that the last scorcher had safely passed, I went back to 14th Street Garden Center and stocked up (and while I was at it, picked up some multicolored ornamental peppers too, because they were just too pretty to pass up).

Every time I come home with a new armload of plants, I’m like a kid with a new pet. I’m just so thrilled and proud. And this latest haul is all the more joyful, because who would have thought that I could have so many colorful posies—in autumn!