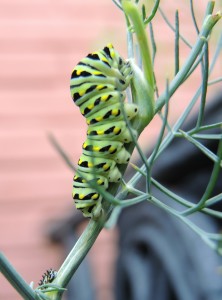 The second of my black swallowtail caterpillars, whom I dubbed Dilbert, was one of the unlucky ones for whom things did not come so easily. As recounted earlier (“Wake Up and Smell the Dill”), he wandered away from the dill in my container garden to form his chrysalis on a sweltering, 90-degree day. He returned hours later, exhausted and listless. When I came to his rescue and placed him in a container with ample sticks for “stringing up,” he didn’t have the energy to attach himself to a stick, as a black swallowtail caterpillar should do before forming its chrysalis. But to my astonishment, he formed his chrysalis the next night, while lying on the bottom of the container. 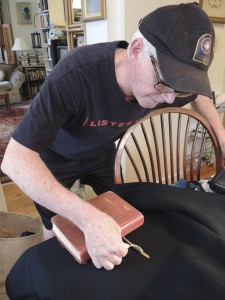 Whatever would happen to him? While the chrysalis of my other black swallowtail had immediately turned a dark brown to match the stick he was on, Dilbert’s was a bright green. Was that normal? (Pilly’s coloration had provided perfect camouflage against the dark stick.) And what would happen to Dilbert’s development in this unusual position—on the bottom of the container, rather than strung up? My husband and I feared that the pressure on his body would harm his nascent wings if he continued to lie there, so my husband did the work of stringing him up, gluing the tip of his tail to a stick and making a little sling with thread to support the upper part of his body.

A week later, I looked at Dilbert’s chrysalis. Once bright green, it was now black with rows of orange and yellow dots–a sign that he was ready to emerge! I hadn’t been sure if he would have the energy needed for the metamorphosis, but here he was, fully transformed. 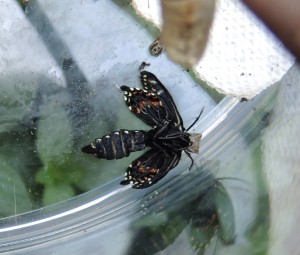 Over the next couple hours, he did manage to come out of his chrysalis—but not as effortlessly as Pilly had done. Unlike Pilly who had been able to walk around the container while his wings dried, Dilbert flipped and flopped, rolling his wings under him. More worrisome, part of the chrysalis had stuck to his head, covering his eyes and proboscis. How would he be able to see? And eat? 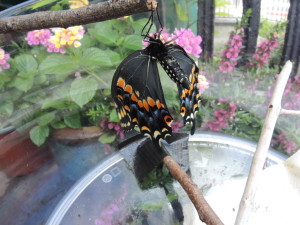 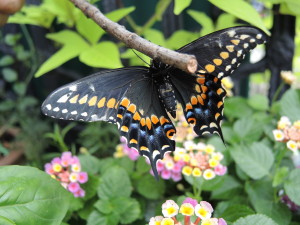 As his wings started to spread and harden, I placed a stick in front of him for him to climb onto. As instinctively as a baby wrapping its tiny fist around an adult’s finger, Dilbert grasped the stick, and I lifted him out of the container. 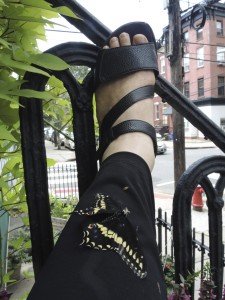 He clung to the stick for the next half hour until he lost his grip and landed—plop!—on my leg. He sat there for the next hour, as I wondered how I was going to explain to my boss why I wasn’t at my desk.

Finally I picked him up on the stick and placed him on the lantana. He fluttered to the ground in between container pots and spent the next half hour or so twitching, then resting, twitching, resting. But he finally did it. With his twisting and turning, he managed to cast off the last bit of the chrysalis. Then he wasted no time and flew away, swooping low to the ground rather than up into the air as Pilly had done. It was a moment of triumph just the same.

This entry was posted in Butterflies and tagged black swallowtail, caterpillar, chrysalis, emerge. Bookmark the permalink.