Butterflies in the Broccoli 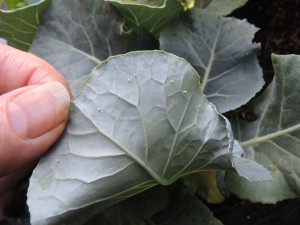 The black swallowtail butterflies are gone for the season. The remaining caterpillars have formed their chrysalises and will spend the winter encased in their crisp armor. But that does not mean that all the caterpillars and butterflies have necessarily vanished for the year. In September, the cabbage white butterflies discovered my broccoli plants and laid dozens of eggs on the undersides of their leaves (photo, above). Curious to see what their caterpillars would look and act like, I plucked off a leaf with six eggs on it and brought it inside, where I placed it in a container.

Cabbage whites are, frankly, regarded as agricultural pests. I have friends who exterminate them as quickly as they can, as the caterpillars can be ravenous little creatures, wreaking destruction on cabbage and related crops. For these friends, it would be unthinkable to coddle and protect the caterpillars (which hostile farmers call “cabbage worms”). But I have always loved the common little butterflies that develop from them. Unlike black swallowtails, which have a jerky, nervous flutter and only visit my garden occasionally to lay eggs, the cabbage whites are gentle little creatures that grace my garden for most of the season, flitting gently from one flower to the next. Their calm presence brings me a sense of inner peace. That’s why I was happy to see a cabbage white butterfly laying eggs on my broccoli on day last month. At last, I thought, their mysteries will be revealed. 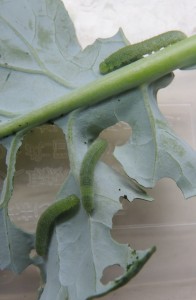 Note to the butterfly enthusiast: If you want to watch caterpillars develop into butterflies, do not pick cabbage whites as your pet project. First, the cabbage leaves (or in this case broccoli leaves) are not exactly floral air fresheners. If you’re just observing the caterpillars outside, that’s one thing, but if you’re picking the leaves and placing them in containers indoors, it’s quite another. All cruciferous veggies—including broccoli, cabbage, kale, and arugula—contain sulfur compounds. Day after day, I would come back to my apartment after running errands or working outside in the garden to an odor resembling rotten eggs. My first reaction was always, “Phew, we really need to take out the garbage!” Then I would remember the broccoli leaves, growing fragrant in the container.

Second, cabbage-white caterpillars turn out to be exceedingly unremarkable little creatures. After the eggs hatch, the larvae are at first so tiny that it is actually hard to see them. Even as they grow larger (photo, above right), they are still hard to spot, so perfectly do they blend in with the leaves. Sometimes they rest right on the midrib of the leaf, looking just like part of the plant. Even when they mature, they are a mere ¾ inch long. If it weren’t for the holes they eat in the leaves—and the poop they leave behind—it would be easy to miss them altogether. Nor do they perform any of the endearing gymnastics of a black swallowtail caterpillar. It’s only when they near maturity that they start to move around the container much at all (video, below).

Still, like all forms of life, they hold mystery. I started with six tiny caterpillars—three of whom promptly disappeared. But where did they go? It’s hard to imagine that there were any of the normal predators inside that sealed container. Certainly no birds plucked them off. So what happened to them? Did I throw them out with the old broccoli leaves, failing to notice them? Or do caterpillars practice cannibalism? I don’t know.

And then there is the ultimate mystery of metamorphosis. No matter how many times I see it, watching a caterpillar form a chrysalis still fills me with awe at witnessing part of a transformation so profound. However, I must admit to having had a tinge of disappointment when I saw the “cabbage patch kids” (as my husband calls them) string up the same way the black swallowtails do. The fact that such an ordinary little caterpillar would spin the very same kind of silken sling somehow made my black swallowtails seem a little less special. I felt like the little prince in Antoine de Saint-Exupéry’s charming book of the same title. The prince had always thought that the rose on his tiny planet was unique. Then he found that on other planets, there were lots of roses just like her. 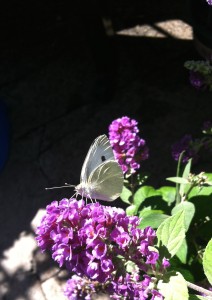 After 9-10 days, the cabbage butterflies emerged. Unlike the flighty swallowtails, they showed no particular eagerness to escape the confines of their little container, but sat patiently on their sticks, even after their wings had hardened and dried. When I tried to release the first one outside, urging it onto a butterfly bush, it fluttered right back into the container—the only home it had ever known. The second one left more readily. Soon they had flown off to explore new gardens.

I went back inside and washed out the container. The chrysalises, left behind, crumbled like a dry leaf.