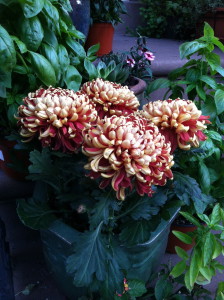 Gardening introduces you to some curious facts. For example, who knew that chrysanthemums entered the United States through my hometown of Hoboken, NJ? Hoboken is known for many things, including being the birthplace of Frank Sinatra and baseball as played by modern rules. It claims to have had the first brewery in America and still has a frightening ratio of bars to inhabitants. It’s the town where the movie On the Waterfront was filmed with Marlon Brando and Eva Marie Saint, with all the extras being town residents. My husband and I quickly learned these bits of random information when we moved here. And yet, it’s somehow taken me years to discover the chrysanthemum connection.

In 1798, it seems, a variety of chrysanthemum called “Dark Purple” was imported by Col. John Stevens, a character in his own right. Col. Stevens served in George Washington’s army during the American Revolution, and he purchased the tract of land that later became Hoboken after it was confiscated from a Tory family in punishment for their misaligned loyalties. As the story goes, Col. Stevens thought the mums would make an interesting “attraction” for a park at the north end of the fledgling town. Who would have imagined that two centuries later, every supermarket in Hoboken would sell truckloads of mums each fall for $5.99 a pot? The small, tight flowers are so dense and so uniform that they lack all sense of delicacy or style. It’s hard to imagine them as an attraction of any kind. 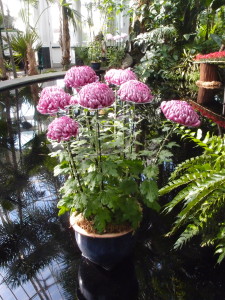 For that, you have to go someplace special, like the chrysanthemum exhibition that took place in October at the New York Botanical Garden (right). Called “Kiku: The Art of the Japanese Garden,” it was a true attraction, showcasing flowers worthy of royalty. Literally. The Japanese have elevated cultivation of mums to an art and even dubbed the emperor’s throne (and by extension, the monarchy itself) the Chrysanthemum Throne. 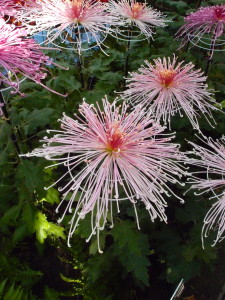 As the show demonstrated, not only can these flowers be beautiful and varied, with forms ranging from spiky spider mums (left) to pillowy “incurve” chrysanthemums (below left), with their mounds of large petals curving gracefully toward a center. They can also be coaxed into growing in truly astonishing ways. To create the ozukuri, or “thousand blooms” design, the gardener takes a single cutting from a mature mum and patiently pinches back the tips of branches, so that a profusion of new branches develops. When the plant reaches a certain size, it is then trained to grow over a giant metal form, the gardener tying down the desired shoots to the frame until the branches form a cascade of flowers or even a bridge (below). The resulting creation boasts hundreds, sometimes thousands, of blooms–all from a single plant.

Granted, this is not something I’m ever going to try at home. The New York Botanical Garden cultivated these plants for a full year to achieve this effect. And to coax the flowers into blooming all at once on cue for the show’s opening, they covered them with giant plastic sheeting for all but roughly six hours of daylight. 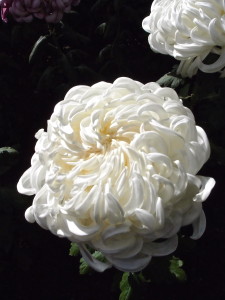 In the Japanese garden, other mums are cultivated for a single precious bloom and lined up in perfect diagonal rows, alternating pink, yellow, and white, like the bridle of the emperor’s horse. The design is known as tazuna-ue, or horse bridle.

I will, of course, never attempt such ambitious designs in my humble container garden. But I do treasure the “football chrysanthemum” on my own stoop earlier this fall (top left). It displays grace and elegance, like something you would see depicted on a Chinese silk jacket or a Japanese screen. It’s my own, very small, Hoboken attraction. 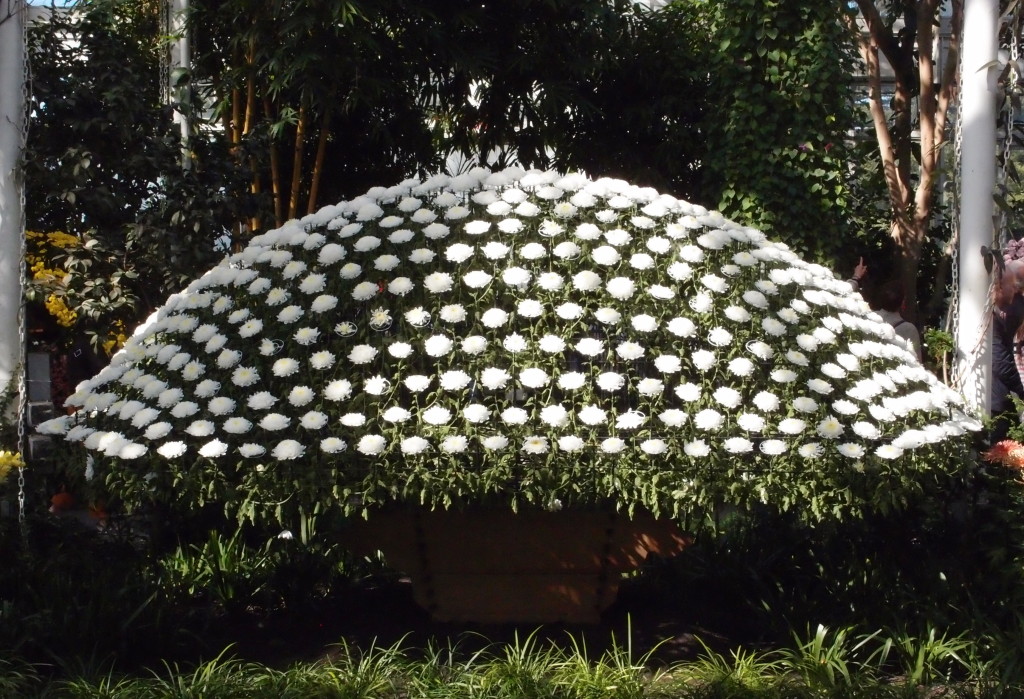