There are few mysteries as deep as the metamorphosis of a butterfly. Watching a caterpillar shed its skin multiple times and emerge as a little creature with entirely different markings is amazing enough. To see the caterpillar form a chrysalis is even more wondrous. Imagine a person’s skin unzipping and falling to the floor, revealing a suit of armor underneath. That’s how bizarre it is. 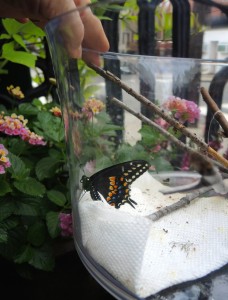 But nothing is more astonishing than seeing a delicate butterfly emerge from that brittle armor. The chrysalis is only slightly larger than the length and breadth of the butterfly’s body—yet somehow a 4-inch pair of wings is rolled up inside, along with antennae, proboscis, and three pairs of legs.

I witnessed all this for the first time today. It had been a week since Pilly, my “pet” black swallowtail caterpillar, had formed his chrysalis, and I really wasn’t sure when he would emerge. But a slight flutter of black wings in the container, glimpsed sidelong this morning, told me the time had arrived. I removed the gauze that had been covering the container, then settled in to watch Pilly for the next hour, camera in hand. 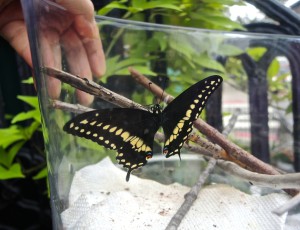 To unfurl those beautiful black wings with its rows of yellow spots, he had to pump each of the prominent veins in them full of fluids, then let the wings harden and dry. As this was happening, he began exploring his old world with his new body. It was no longer lithe and limber, and to make things more awkward, he had wings trailing behind him as he tried to walk along the bottom of the container. But one thing he could do very well, it turns out, was climb up the sticks I had placed in the container last week. He chose one as the ideal wing-drying spot and clung to it for half an hour before deciding it was time to fly away.

To my surprise, getting out of the open container proved difficult. Pilly climbed to the highest end of the stick, but it was leaning against the side of the container, an inch or two shy of the top. Instead of fluttering to freedom, he tried to climb that last inch, but his little legs pawed uselessly against the plastic, gaining no traction. Do insects who have undergone such a metamorphosis have any memory of the past? Did he recall that as a caterpillar he had climbed those plastic sides with ease? And can anything as simple as an insect have a shift of consciousness as he realizes he no longer needs to crawl, but can fly?

He stopped flailing at the sides and fluttered a few times gently—then with more urgency—but still to no avail. It occurred to me that he didn’t yet know how to fly upwards, as his efforts only seemed to be propelling him forward against the side of the container. So I placed another stick between his front legs, this time pointing it straight up into the air. Immediately, he grasped it, and in the blink of an eye, he had climbed to the top and taken wing. A novice flyer, he swooped toward my head. I ducked–then looked up and saw him corkscrew higher and higher in widening circles before he disappeared against the sky. 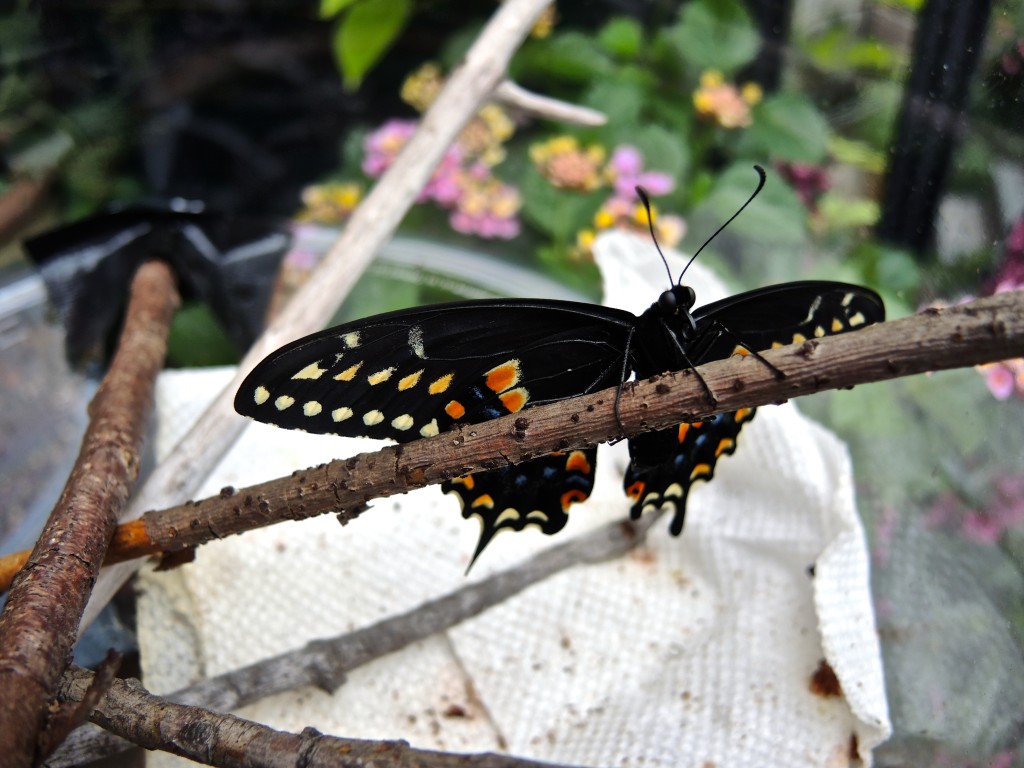 This entry was posted in Butterflies. Bookmark the permalink.