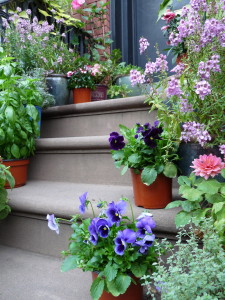 Denial. That’s the official term for refusing to believe what is perfectly obvious—that fall has arrived, and winter is on its way. That’s also a partial explanation for why there are still spring flowers on my stoop—azaleas, pansies, dianthus. Never mind that other houses up and down the block are decked with pumpkins and golden chrysanthemums. At other homes, Halloween hobgoblins and giant spider webs may prevail, along with mock tombstones bearing spooky inscriptions like “Out to lunch.” (Think about it.) But on my stoop, spring still reigns. 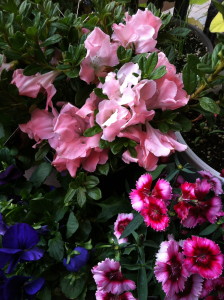 I suppose I should let my garden age gracefully, like a dignified woman allowing wisps of silver to crown her face and gentle lines to reveal the years of smiles and cares. But, no. Nurseries have enabled this version of horticultural self-deception, and I’m taking full advantage of it. Pansies naturally thrive in shorter days and cooler weather, whether it occurs in spring or fall, so they’re easy to coax into bloom. Other plants have been specially bred for the purpose. The dianthus on my stoop—a cross between Sweet William and traditional dianthus—produces a hardier blossom that can flower through the summer and into the autumn. 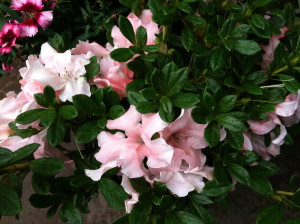 But most astonishing to me is the Autumn Debutante azalea that I was given at the Garden Bloggers Conference a month ago. To me, azaleas are shrubs that bloom for a few weeks in the spring and then flame out. An autumn-blooming azalea is a complete contradiction in terms. Yet my Autumn Debutante has kept right on blooming for the last month, even as the mercury plunges.

How is this possible? The answer is deceptively simple: you just cross a standard azalea with a “repeat-blooming” variety that flowers in other seasons, too. The problem is finding such a plant–and creating viable hybrids. “Azaleas aren’t native to North America,” says Buddy Lee, who bred the Autumn Debutante, along with the 28 other “autumn” varieties offered by Encore Azaleas. The varieties in this country are all spring bloomers. But Lee was fortunate enough to be given a rare summer-blooming azalea from Taiwan. He set about crossing it with other varieties that have different size leaves, larger or smaller blossoms, a range of colors, and different degrees of hardiness. As he says, “I created 9,000 seedlings, using pure plant breeding with cross pollination—not the Frankenstein type.”

But a great seedling needs someone to market it. Lee brought his cache to Plant Development Services Inc., which grew up to 300 plants from each seedling to determine whether that variety could make it as a commercial plant. Did it have a pretty bloom color? Did it grow well? Was it easy to propagate? “Lots didn’t make the cut, got dumped,” says Aimee Coker of Plant Development Services. “It took 15 years to introduce the first five varieties.” That was in the late 1990s. Now there are 29—all with the name “autumn” in them, to emphasize that they’re not just spring bloomers. 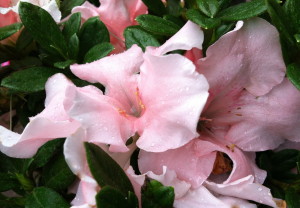 The beauty of the autumn azalea series is that it blooms in spring, summer, and fall. In my urban garden, where space is at a premium, every plant has to produce. The Autumn Debutante passes the test—and is even attractive to butterflies and hummingbirds. Just remember not to trim it in late spring or early summer, or else you will be trimming off the new shoots that produce the buds. And give it plenty of sun, water, and fertilizer during the growing season, tapering off before the first frost. “They take a lot more sun than normal azaleas (4 yo 6 hours of direct sunshine a day), because they’re blooming more,” says Lee. (See care tips here.) Better yet, he adds, “The more mature they get, the more they bloom. As they establish, they can really put on a show.” I can’t wait to see it.