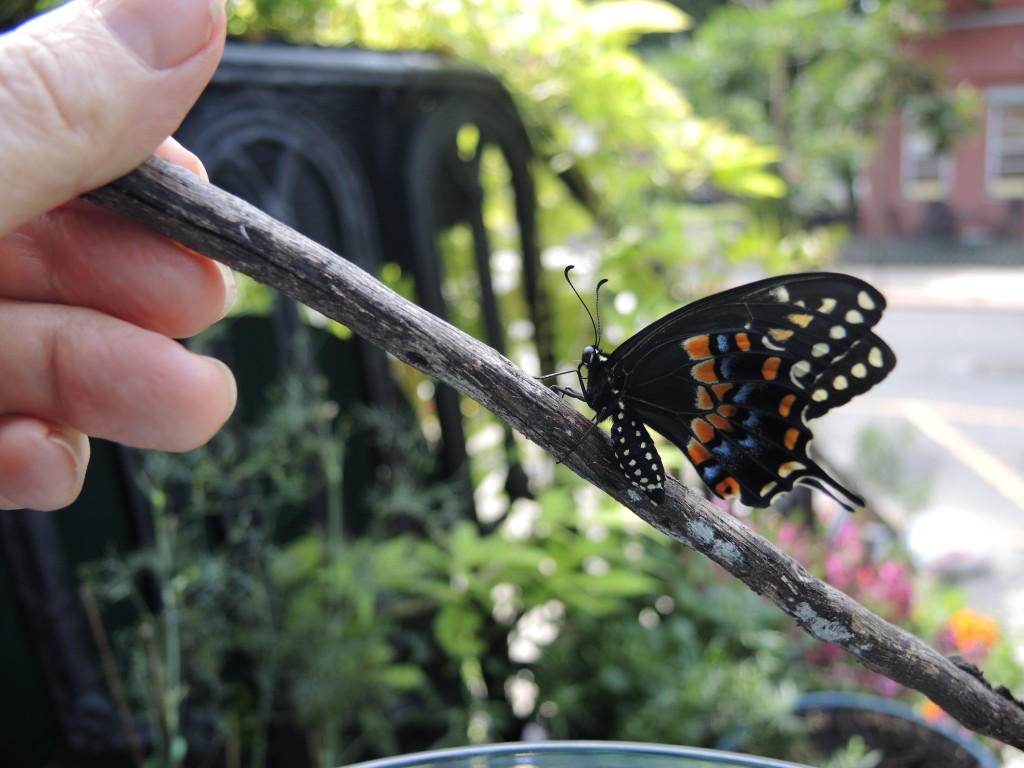 Nineteenth-century Americans were obsessed with butterflies. They called them “flying flowers” and “flying jewels,” in the words of Augustus Radcliffe Grote. But in those days, butterflies were more plentiful than they are today. Walt Whitman described walking down country lanes and seeing “butterflies and butterflies, all sorts, white yellow, brown, purple—now and then some gorgeous fellow flashing lazily by on wings like artists’ palettes dabb’d with every color.”

Today, butterflies are under pressure from loss of habitat and hazards ranging from viruses to birds and parasitic wasps. The latter actually lay their eggs inside caterpillars, which continue to grow for a while–until the wasp larvae hatch and eat the caterpillars from the inside out. Sometimes the caterpillar lives long enough to form a chrysalis. Then, in a scene worthy of science fiction, what emerges from the chrysalis is not a lovely butterfly, but a parasitic wasp. Woe betide anyone who brings home a chrysalis and expects a butterfly to emerge, warned a 1951 butterfly guide. Even a caterpillar rescued from the wild might yield a similar nasty surprise, it cautioned. But that’s not enough to deter me.

I’ve seen too many wasps around my dill this year, landing on the branches and climbing inside the fronds. They could only be searching for one thing, I figured, and that was my little black swallowtail caterpillars. 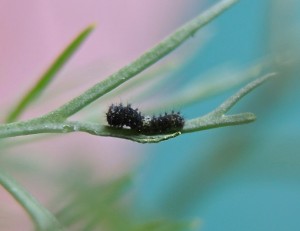 So when I saw a wasp circling insistently several weeks ago, landing repeatedly on the dill and parsley (which also plays host to black swallowtail caterpillars), I shooed it away over and over again. He looked so huge and menacing compared to the tiny first and second instars (photo, left)—tiny smudges of black at this early stage. I reacted like a mother whose children were under threat. I shooed him away again, then cut off the branches three of the little guys were on and brought them inside to put in a protected container. On the spot, my husband and I formed our own informal, strictly unofficial organization—the Caterpillar Rescue League (CARL)—to help protect this fragile slice of nature. 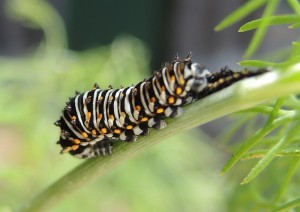 Over the following weeks, I got to observe my little guys much more closely than when they were outside. I had seen them shed their skins before (left), actually wriggling out of the old ones, which remained behind on a stalk. But what I saw for the first time was how they eat the old skin! 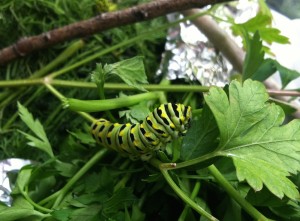 I had thought that caterpillars born on dill would never cross over to parsley and vice versa, but that proved to be wrong. They moved from dill to parsley after a few days, which proved to be a wonderful thing for me, since parsley lasts much longer. I supplied some of the parsley from my garden. The rest I bought at the market and kept in the fridge until needed. In the morning, I would find myself pulling more parsley out of the refrigerator and warming it up to room temperature before switching it out for the old parsley, like a mother warming a baby’s formula. They seemed to like it just as much as dill, so they became known in our household as the Parsley Pillies (since all our little caterpillars seem to acquire names). You can see in the following video how they got that name. Continued on next page ->

Pages: 1 2
This entry was posted in Butterflies and tagged black swallowtail, caterpillars, rescue. Bookmark the permalink.