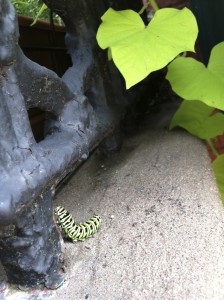 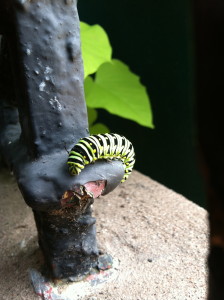 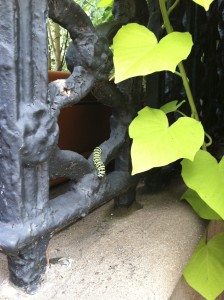 Ever since I found a black swallowtail caterpillar in my dill, I’ve been obsessed with the tiny creature and even given him a name–Pilly the Kid. Now Pilly’s moved on to the next phase of his mysterious life. Late last week, I saw that he would soon be forming a chrysalis, so I went outside to keep an eye on him all afternoon, as he searched for a suitable spot. It was exhausting (for me, and I’m sure for him) as he inched his way along the stoop, over the railing, back along the stoop, and up the wall. Curiously, through this vigil, I had the odd sensation I wasn’t the only one monitoring his progress. As I sat there, a female black swallowtail butterfly swooped over again and again–the first time I’ve seen one in a month. She repeatedly visited Pilly’s patch of dill while he was climbing the wall (photo, below).

I suspected that Pilly was trying to get back to the awning where he had spent the night, but he seemed lost. Four hours later, when I could no longer stand his futile attempts, I finally scooped him up onto a chop stick and gently deposited him on the awning, where he soon crawled into a protected spot between the ledge over the cleaners and the awning that curves over the top of the ledge. It’s not a great place for observation. But I must hand it to the little guy. That spot is very well protected, while still allowing him space to spread his wings and fly when the time comes.

My husband and I borrowed a 10-foot ladder from our landlord, so we could climb up to Pilly’s new digs and make sure he was OK. (You can imagine trying to explain that one to the landlord. “No, there’s no problem. Yes, the apartment is fine. You see, there’s this caterpillar…”) Anyway, Pilly seems to be doing exactly what he’s supposed to, though the process is surreal. For two days, the squirmy, colorful little guy didn’t budge, while his body was secreting the enzymes that would literally split the skin down his back, leaving the hard armor of the pupa underneath. It’s odd to see him now, encased in a rigid, brown chrysalis. But I know that a lovely creature will emerge–and when he does, at least he will have some food. The butterfly bushes are still in bloom. And I’ve bought a large lantana plant, which I’m told is good butterfly food. And now, the wait continues…..

In the meantime, I keep anxiously watching this wonderful slide show I found online of a black swallowtail’s metamorphosis, to reassure myself that all is well.

Related posts :
On my discovery of Pilly: Beetles and Snails and Mites, Oh My!
On Pilly’s antics: The Secret Life of a Caterpillar

This entry was posted in Butterflies, Most popular posts and tagged black swallowtail caterpillar, crysalis. Bookmark the permalink.

One Response to Metamorphosis Begins!