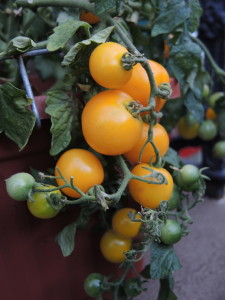 Call me crazy, but I’m always shocked when people take things from my garden—like half a dozen roses, or entire potted plants, or my garden hose. Lately, of course, it’s the tomatoes. Both the Cherokee Purple heirlooms and the Sun Sugar cherry tomatoes are apparently ripe for pilfering, as I routinely discover when I go out to pick these vine-ripened beauties for the night’s salad or ratatouille. Even the police are not above suspicion. “Nice tomato garden,” said a beat cop to me the other evening. “Thanks, but people are stealing them, “ I replied. To my amazement, the cop said he’d thought about it himself. 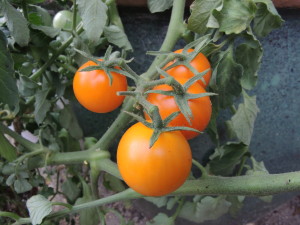 “Hey, this is New Jersey,” he said. “We grow great tomatoes.”

But almost every day, something really nice happens, too. While I’m out watering my garden, a puppy will wriggle through the fence to sniff the tomatoes, or I’ll spy a butterfly flitting among the butterfly bushes, or someone will stop to compliment the flowers, or give their children a lesson in herbs and vegetables, or tell me about the glorious gardens their parents used to have in the old country, wherever that might be. “My mother always said she felt closer to God in the garden,” said one stranger who recently. Well said. 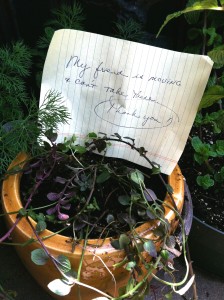 But something really extraordinary happened in late May. A woman I’d never seen before came by while I was watering. “I see you like plants,” she said. “Can I give you mine? I’m moving.” Could she! Would I ever say no to plants? Her friend came by the next day and left a small collection on my stoop, with a little note thanking me for taking them (photo, right). They were mainly struggling houseplants that would need to be nursed back to health. But there was one that I was thrilled to have—chocolate mint.

Chocolate mint has been aptly described as tasting like the mint in Girl Scout cookies. It’s got a strong menthol flavor and releases a mouthwatering aroma when you brush past it. It’s supposed to taste particularly delicious in anything made with chocolate. But it also tastes good in anything you’d use spearmint or peppermint in. I use mine in mint tea, vanilla yogurt, salads, even herb sauces for fish.

I immediately went out and bought a new chocolate mint plant that was younger and healthier and has since then sprawled enthusiastically along my stoop. I’m obliged to pick mint regularly to keep it under control—a pleasure, if ever there was one, for chocolate mint has become, well, my newly minted favorite. 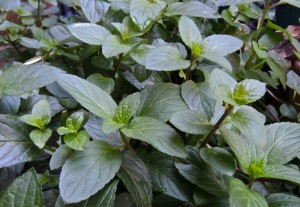