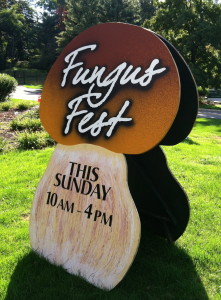 When I first planted my container garden, I naively thought that I would get to decide what grew there. After all, I wasn’t trying to reclaim some weed-choked lot, but was starting from scratch with pristine containers. Little did I know. Nature had her own designs on my space, and they didn’t necessarily coincide with my own. First grasses started popping up, then the inevitable weeds. Then this summer, I suddenly found my euonymus pots brimming with yellow and white mushrooms–not to mention the pink and grey fungi that materialized amidst my parsley. What the heck are these things? It’s been bugging me all summer.

That’s why I was so excited to see a poster for Fungus Fest, sponsored last weekend by the New Jersey Mycological Association. The poster promised plenty of fun and learning opportunities: “Exhibits and talks,” “guided mushroom walks,” “mushroom cooking demos,” “mushroom arts and crafts,” and, most exciting of all, “your mushrooms identified (bring your mushroom finds!).” Of course, I had to go–and I was lucky enough to snag mycologist Gary Lincoff of the New York Botanical Garden long enough to look at my photos and give me a couple quick IDs. 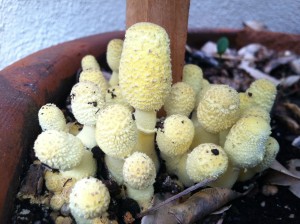 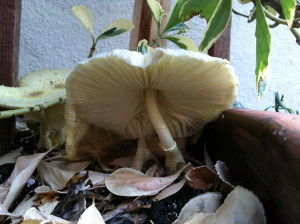 Lincoff instantly fingered this guy in my euonymus pots as Leucocoprinus birnbaumii. He offered no further information, so when I got home, I took that name and plugged it into Google. Up popped multiple descriptions of what is apparently an exceedingly common mushroom in container gardens–so common that it’s acquired many common names, including “yellow parasol,” “flowerpot parasol,” and most ingloriously, “yellow houseplant mushroom.” (These two photos are of the same type of mushroom, but the ones on top have not yet opened.) Michael Kuo, author of the book 100 Edible Mushrooms, has this to say about it on his website MushroomExpert.com (the emphasis is mine): “This little yellow mushroom is the subject of many frantic e-mails to MushroomExpert.Com, since it has a tendency to pop up unexpectedly in people’s flower pots–even indoors! Leucocoprinus birnbaumii won’t hurt you, unless you eat it. It won’t hurt your plant. It won’t hurt your pets or your children, unless they eat it. There is no getting rid of it, short of replacing all the soil in your planter (and even then it might reappear).” Yes, this tenacious fungus is poisonous, so don’t be tempted to harvest it. But at least it won’t harm the plants–and may even help by breaking down organic matter in the soil. 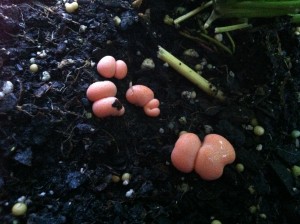 And this guy? Not a fungus at all, says Lincoff, but a slime mold! This one is called Lycogala epidendrum, or Groening’s slime, and it’s apparently common in the temperate zone. It’s not looking particularly slimy in this picture, but that’s because of its stage of development. For most of its life, it will be a single-celled, amoeba-like blob that actually moves around, engulfing bacteria, spores, and non-living organic matter. “People have put them in mazes and found they will move through the maze,” says slime mold enthusiast Phil Layton, president of the New Jersey Mycological Association. But at some point, when it’s time to replicate, these single-celled organisms aggregate by sending out chemical signals to their fellow plasmodia to come together and form a mushroom-like “fruiting body” that will disperse spores. At this stage, it resembles a fungus, which is why slime molds were classified as fungi for a long time.

With the dry weather we’ve been having lately, my fungus problem seems to be under control. We’ll see how long that lasts….