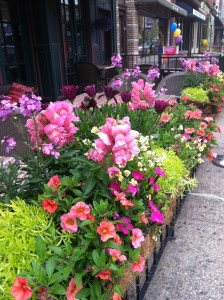 Not every garden has a godmother. Mine does: my neighbor Jane.

I first met Jane one early morning when she was tending the window boxes and hanging baskets of the corner pub, and she’s been an essential part of my life ever since, offering advice on everything from watering to pruning.

Maybe it’s because neither one of us has children that we think of the garden as something akin to family. Jane routinely inquires after “the kids.” She shares my fascination with each new developmental stage they go through. When I am about to depart on a trip, she happily takes charge of their care and feeding, listening to my plant-sitting instructions. “Feed the plants every day.” “This one is especially thirsty.” “Pick any food you want from the herb garden.” “Feel free to deadhead the bushes.” (Hmmm. Maybe that’s where the parallel to baby sitting ends–I can’t recall ever being instructed as a sitter to lop off the children’s heads.)

While I’m away, she sends reassuring emails saying that the kids are fine and on their best behavior.

She has, however, occasionally expressed surprise at how rapidly the family is expanding and wondered what ever happened to family planning. Last fall, after the two large euonymus bushes appeared in the concrete strip along the side of the house, she emailed, “I see you are harkening back to an early historical time of large families. When did the twins join the clan?” She’s even gone online to see if there’s such an organization as Plants Anonymous–in vain. After all, what gardener would want to kick this habit–especially with such an able garden godmother to help?

This entry was posted in Uncategorized and tagged plant sitting. Bookmark the permalink.