Posted on November 1, 2013 by Anne Underwood 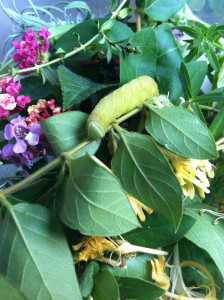 I know it sounds like a children’s story, but this is no tall tale. It’s the story of how I ended up with a rescue caterpillar. Seriously.

My father-in-law has been following my exploits with black swallowtail caterpillars. So when he saw a green caterpillar, nearly frozen on the sidewalk during a recent cold spell, he scooped it up into a paper cup and gave it to my husband to bring home to me. There was a Post-It note attached to the cup: “This is my caterpillar, Binky. Please take care of him.”

Compared with my handsome, colorfully striped swallowtails, I must admit that Binky seemed very ordinary. He was large and lumbering, with no distinctive markings, except for some barely noticeable diagonal yellow stripes—a workaday type of caterpillar compared with my lithe, delicate swallowtails. As I picked up the cup and peered inside, Binky began scratching at the cup with three powerful little pairs of forelegs, each of which had a tiny claw at the end. What was I going to do with this creature?

I went to the Internet and began trying to figure out what type of caterpillar he was. It didn’t take long to identify him as a Hemaris thysbe. “Hmmph,” I thought, “what’s that?” But when I looked it up, I was wowed. Hemaris thysbe is a moth, commonly known as the hummingbird clearwing—a name derived from the transparency of the central part of each of its wings, plus its tendency to hover over a flower like a hummingbird while it sups nectar. As for the colored portion of the wing, it’s a deep, rich burgundy, while the upper part of its back is shaded a contrasting olive green. It was far more handsome than any moth I’d never seen before—certainly much more attractive than the little brown and grey guys that eat holes in my sweaters.

I found all kinds of curious factoids about this moth. The central part of the wing is clear because the scales fall off as the young moth begins to fly. It has no equivalent of ears. It migrates. Instead of overwintering as a chrysalis like my swallowtails, it overwinters as a caterpillar by burrowing into the ground. Fascinating.

But what was I going to feed him? As it turns out, the clearwing caterpillar feeds on all kinds of exotic things, like cherry trees, European cranberry bushes, hawthorns, and snowberry—none of which were available. (What’s a snowberry, anyway?) Then I saw that both the caterpillar and moth like honeysuckle. Bingo! 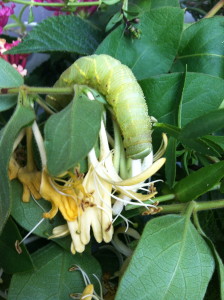 I happened to know a fence in town where there was still some honeysuckle in bloom, so my husband and I raced over immediately to pick some. I put our cuttings in a container, along with moistened paper towels and a variety of other leaves and flowers (just in case I’d misidentified Binky). In the morning, I found him curled around the honeysuckle. He’d even taken a poop, which I took as a good sign. At least I would have some progress to report to my father-in-law.

The day after, however, when I opened the lid of the container, Binky was nowhere to be found. Where could he have gone? I pulled out the honeysuckle. There was no sign of him. I removed the angelonia, the lantana, the basil. Not a trace. Then I peeked under the moistened towels. There he was. “Aha,” I thought. “He’s trying to burrow.”

I took the container back over to the field where I’d collected the honeysuckle and emptied its contents next to the fence. To my amazement, he immediately began to dig. Those tough little claws began scratching at the ground, and in less than a minute, the front half of his body had already tunneled down into the dirt, leaving his back half sticking out. Another minute later, that too was gone. I sat there, blinking at the spot where Binky had been just moments before.

I walk past that spot every day on my morning walk. Sometime next spring, if I’m very lucky, maybe I’ll catch a glimpse of a handsome moth. In the meantime, I’ll just watch this video.

This entry was posted in Butterflies and tagged caterpillar, Hemaris thysbe, hummingbird clearwing. Bookmark the permalink.