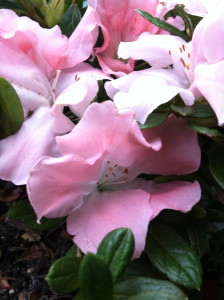 I knew that airport security would pull me over, and they did. I was flying home from the Garden Bloggers Conference in Atlanta with an azalea in my suitcase—yes, an actual shrub—and the round pot, filled with damp soil, must have looked like a bomb to the pair of agents screening the carry-on luggage. “Is this your bag?” the TSA officer said to the gentleman behind me, as soon as my suitcase had gone through the scanner. “No, it’s mine,” I volunteered. “It’s a plant.”

A look of relief crossed the agent’s face—then a smile, as I opened my suitcase, revealing the deep green foliage and soft, pink blossoms. She still had to wipe down my luggage, looking for explosives, but this was clearly the highlight of her workday. Her whole demeanor softened. “Have a good flight,” she said, waving me cheerfully on. 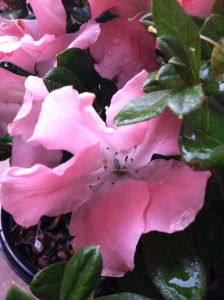 I’ve never tried flying with flowers before, and I don’t recommend it. But when you’re at a garden conference, and every attendee is given an azalea, what are you going to do? To my amazement, it’s not actually that hard to pack a plant–at least, not a sturdy one like an azalea. I simply bundled it into my suitcase, wrapping a plastic laundry bag from the hotel around the pot, so that dirt wouldn’t spill out onto my clothes. Then I stuffed my clothes around it, trying to cushion the shrub from the inevitable bumps.

Eight hours, two cab rides, and one airplane flight later, the azalea emerged from my suitcase—a little worse for the stifling and parched trip, but still alive. Now, three weeks later, you’d never guess how many petals were crushed en route. My azalea, as you can see, is thriving.