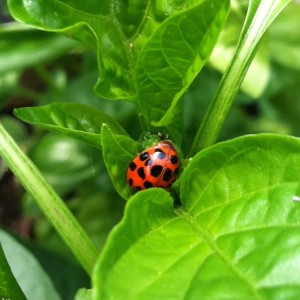 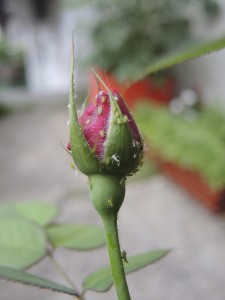 As I walked past my pepper plants the other day, I looked down and saw a ladybug.

Second thought: “Uh-oh. What is she finding to eat?”

Ladybugs are known as gardeners’ friends because their favorite food is those annoying aphids that eat your plants. I took a closer look, and sure enough, the undersides of leaves on my two pepper plants were lined with aphids. Then a few days later, I saw unopened buds on my rose bushes covered—covered!—in tiny aphids. Clearly, the occasional ladybug was not up to this task. I needed to call in recruits.

Fortunately, you can buy ladybugs by the hundreds and release a small army of them into your garden. According to Organic Control, Inc., which sells them in plastic tubs, each ladybug can devour up to 50 garden pests per day. There are only a few rules: Release them where they’re likely to find food (not a problem in my garden); release them in the evening when they’re unlikely to fly away; and release them after you’ve watered the garden, because they’ll be thirsty, their plastic container being filled with a high-protein food, but no water.

So come evening, my husband and I went outside and tipped out some ladybugs into the basil, others into the peppers, still more into each of the rose bushes. Until then, they’d been kept in the refrigerator to slow down their metabolism, and as a result, they moved sluggishly. But once they were released into a room temperature garden, they became as frisky as ladybugs can be. First they went right for the rims of the containers, which were sprinkled with droplets of water. But much to my amazement, the second thing on their mind wasn’t aphids. It was sex. Continued on next page ->

Pages: 1 2
This entry was posted in Garden pests and tagged aphids, Ladybugs, Roses. Bookmark the permalink.