Posted on November 7, 2015 by Anne Underwood 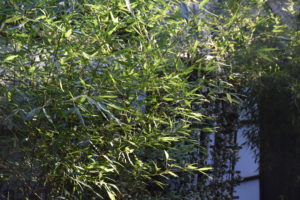 When we moved into our new house, I found a garden already in place, though not the garden I would have created for myself. In my ideal garden, I would have tons of wildflowers and native plants. It would be full of bees and butterflies. And I would feed myself for much of the summer from its produce. What we have here instead is a garden that’s shaded most of the day, precluding the riotous flowerbed and vegetable garden I would normally plant.

But the previous owners created something equally amazing in its own way–a Japanese-style garden, full of stones and sculptural rocks and an astonishing sense of tranquility for a garden in the midst of a bustling city. There is a small pond and waterfall in the back, which has a remarkable effect on visitors sitting out back. “It’s better than a spa break,” as one friend put it. The previous owners left these notes so that we could understand what we’ve been lucky enough to inherit.

Excerpted from A Japanese Garden Journey: Through Ancient Stones and Dragon Bones by Judith D. Klingsick

“A Japanese garden is often called a ‘garden of the mind’… Whatever its style, every Japanese garden serves as a mirror of nature. Perhaps the most vivid reflection you will see in that mirror is a ‘tension of opposites:’ delicate versus dramatic, changeless versus changing, wild versus controlled. Like the cosmic forces of In and Yo (Yin and Yang in Chinese philosophy), the opposites are never in conflict. Rather they complement each other in order to bring about balance and harmony in life as well as in the garden.” 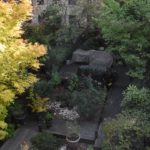 ~ Zigzag pathways: “Japanese legends say that evil spirits can travel only in a straight line. Therefore, bridges and pathways often use zigzags in their designs. While you can easily shift directions, the evil spirits that may be following you can’t twist or turn. They either fall off the water or veer off the path, no longer able to bother you.” 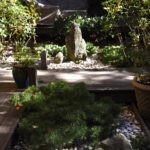 ~ Rocks: “Ancient legends suggest that huge rocks heaving out of the ground are dragon bones. In fact, rocks throughout the history of Japan have been called ‘the bones of the earth.’ They are the framework or skeleton that holds the world together. Whether they are pebbles for a river bed or boulders for a mountain-scape, rocks are the most important element of a Japanese garden. Garden designers… determine the rock’s best ‘face’ by looking at its veins, colors and fissures. They plant rocks into the ground, making it seem as if a rock has been living in that place forever. The more moss and lichen growing on a rock, the better, because they add age and permanence to its character.”

~ Small rock gardens: Ours were influenced by Zen gardens “named after a branch of Buddhism which emphasizes meditation and simple living in harmony with nature as ways to find inner peace.”

~ Bamboo fence & bamboo plants: In Japan, this member of the grass family is a sacred barrier against evil; in China, a symbol of longevity. 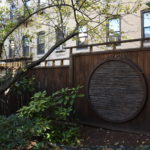 ~ The “moon gate” on our back fence is a variation on this theme:

From Lewis Ginter’s Botanical Garden: “A moon gate is an intriguing entryway that dates back to ancient China and Japan. Its defining element is a partial-circle opening that acts as the pedestrian’s passageway into the garden…. Asian noblemen incorporated moon gates in their landscapes for spiritual enrichment. The opening transported the visitor from the human world to the natural world—from busyness to relaxation and reflection … Then and now, a moon gate symbolizes the transition to a special place of beauty and respite … the circle universally represents perfection, eternity and wholeness. The moon gate takes you from one place of beauty to another, and in its pure form reminds us how we all are connected through space, time and spirit.”