My new rose bushes have arrived—sort of. Last year I bought Knock Out roses, which were touted as everything I thought I was looking for. They were disease resistant, heat tolerant, long blooming, and even “self-cleaning,” meaning that you don’t have to deadhead the wilted blossoms (so fewer thorns in your fingers!). In short, they are perfect—except for one thing. My Knock Out roses last year were hardly a knockout. True, they bloomed from spring to frost, as promised, and added a welcome splash of color to the side of the house (photo at left). But the blossoms were flimsy little things without a whiff of scent that left me longing for honest-to-goodness English roses—the kind that fill English country gardens, climb trellises and arbors, and scent the air with heavy blossoms. The kind that fuel passion. 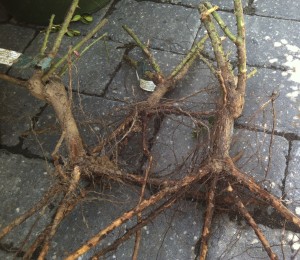 This year, I decided to supplement my collection of Knock Outs with some serious roses from a serious grower, David Austin Roses. Now maybe, just maybe, I am reaching beyond my abilities. I decided to be bold and buy the way Austin prefers to sell plants—as “bare roots roses” rather than fully formed plants in containers. When you order bare roots roses, you receive exactly that—a dormant shrub consisting of some seriously pruned stems and a cluster of brown roots, with no leaves or soil attached. It’s far cheaper to buy the plants and ship them that way—and they may even produce stronger plants than ones that arrive fully formed, since you can plant them earlier in the season and let them establish themselves better before the growing season begins. 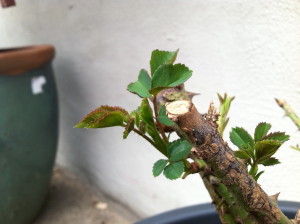 My collection of bare roots arrived a month ago, and I planted them right away in containers filled with rich organic soil and the pouch of mycorrhizal fungi that Austin included to kick start growth. It’s still hard to imagine how flourishing bushes are going to emerge from these snub-nosed stems. But two of my four new rose bushes have started sending out tiny leaflets–and with them, hopes for some glorious blooms.