What’s Wrong With My Basil? 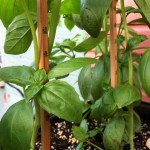 One of the greatest joys of summer for me is fresh, fragrant basil, so crisp and flavorful that it puts the so-called “fresh” stuff in the market with drooping leaves to shame. My husband and I eat basil all summer long with tomatoes and mozzarella, in pesto, in salads, in soups, in sauces—in just about anything except dessert. 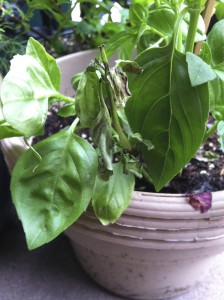 So when May arrived this year, basil seedlings were among my first garden purchases. Full of hope and anticipation, I bought four little plants with small, robust looking leaves—except for one crinkled yellow leaf, but I paid no attention to that. I assumed that I would just pluck it off, and any new growth would be strong and healthy. Wrong. 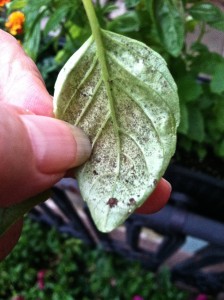 Much to my surprise, what followed wasn’t batch after batch of healthy basil, but one leaf after another than turned yellow or shriveled or simply didn’t look right. When I checked the undersides of the troubled leaves, I invariably saw brown speckling (photo, left). It looked as if dirt had somehow been splashed up onto the leaves during watering, but it appeared too consistently on the diseased leaves for that.

A friend identified the problem as a fungus and suggested that I buy a fungicide. However, I’m leery of such things, because I don’t want to do anything that might harm the bees or butterflies. So instead, I started plucking off the leaves—one after another after another–but to no avail. The contagion continued. Finally I resorted to the only remedy I could think of. I chopped the basil all the way down–stem, leaves, branches–until there were only tiny stubs of stalks left sticking up out of the soil. 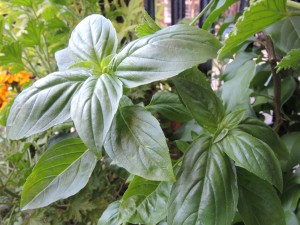 Eventually strong, beautiful plants grew back (photo, right). But what was this pestilence? I finally got an answer. “Downy mildew,” says plant pathologist Margery Daughtrey of Cornell University. And what should you do when you find it? Unfortunately, fungicides are not much help at this stage. The time to spray is before symptoms appear. Planting basil in full sun can help, especially if you leave space between the plants, so that air can circulate. But the best way to deal with downy mildew is the least welcome: “Uproot the plant and get rid of it,” Daughtrey advises. Then throw away the soil and decontaminate the pots.

This entry was posted in Garden pests and problems, Uncategorized and tagged basil, downy mildew. Bookmark the permalink.