Posted on November 6, 2013 by Anne Underwood 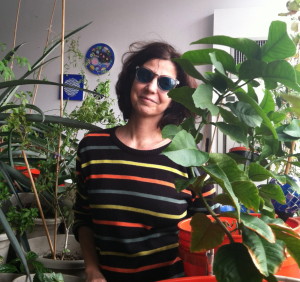 “I’m a city girl from Paris,” declares artist Francine Demeulenaere. “But I woke up one day two years ago with a dream in my head. It was so clear in my mind, this sentence: If each person in the world could plant four fruit trees, in five years there would be 28 billion fruit trees on the planet.” That’s billion with a “b.”

It was an idea she couldn’t shake, so she decided to start planting her own four. But where? She was living in a small apartment in New York City and renting an art studio in Hoboken, NJ, across the river. Neither one included land. Her studio did, however, have a wall of west-facing windows that let in plenty of light. Demeulenaere decided to turn her studio into a place for both painting and planting. 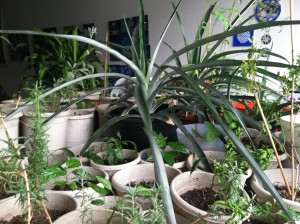 To say that she has full-fledged trees now would be an exaggeration. “It takes five years on average to grow a fruit tree and I only started two years ago,” she says. But she has two enormous tables, groaning under dozens of heavy pots full of shoots, saplings, and cuttings from exotic plants—lemon trees, orange trees, passionfruit, peach trees, even pineapple—not to mention a grapevine, lettuce, carrots, cucumbers, peppers, lavender, rosemary, thyme, mint, Thai basil, marjoram, and a “rescue plant” she can’t identify. All together, it creates the impression of a small jungle. “Here I have two seasons,” she jokes. “Summer and when the heating comes on.”

For Demeulenaere, almost any fruit or vegetable on her dinner plate becomes a source of potential seeds. Even her sprawling pineapple plant was a do-it-yourself job. (Want to try it? Cut off the leafy crown of a fresh pineapple, strip the bottom leaves to reveal the stem, then stick the whole thing stem-down in water for a couple weeks until it forms roots a couple inches long. Then plant in sandy, well-drained soil.) 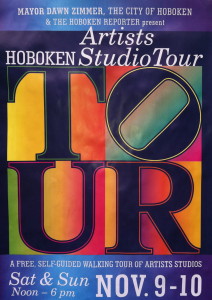 Before long, Demeulanaere’s plants came an artistic inspiration, as she started to notice that certain patterns in nature repeated. The cosmos in all its grandeur, she found, formed a mirror image of the tiniest details of her plants. For example, the closer she zoomed in on the center of a daisy, the less it looked like a colored pad anchoring petals and the more it resembled like the Milky Way. She began taking photos of her plants—so close up you would be hard pressed to identify any individual parts—then superimposing a piece of glass onto which she paints dots, creating a three-dimensional image that does indeed look cosmic.

The 18th century French philosopher Blaise Pascal, she says, noted the similarities of the microscopic and infinite and has become her inspiration with quotes like this: “By space the universe encompasses me and swallows me up like an atom.” And this: “Nature is an infinite sphere of which the center is everywhere and the circumference nowhere.”

As she says, “It makes me think that nature has an intelligence and is telling us something that we are not seeing because we are so disconnected from the natural world. But what if everybody could grow something in their homes? Then maybe we could reconnect with nature and able to live in harmony with nature instead of against it.”

Her studio is on the artists’ studio tour this Saturday and Sunday in Hoboken.