Beetles and Snails and Mites, Oh My! 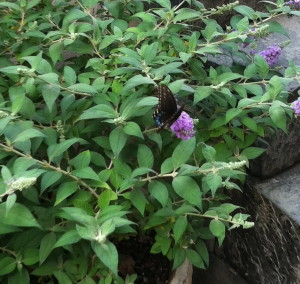 My father was a saint–or slightly dotty, I’m not sure which. An Episcopal priest who was highly influenced by the Quakers, he was a gentle soul who, in his later years, would ask permission of flowers before picking them. If insects found their way into his house, he would bend down and tell them patiently, “You don’t belong inside. You should go outdoors.” Usually they did–or so he said.

Me? When I find big, ugly insects in my home, I’m more of the scream-and-squash-them camp. And lately, it seems, I’ve had plenty of opportunity to practice.

A couple weeks ago, I caught my husband staring at my chest–and not in a good way. His face seemed frozen with concern. It turned out that a beetle was clinging to the front of my white T-shirt. And it wasn’t the first time I’d inadvertently brought a beetle inside after being out in the garden. Earlier in the week, I was working on the computer when I glanced down and–plop!–one fell out of my hair and into my lap. Neither of those beetles lasted long enough for a lecture on how they should really go outdoors.

Beetles are not the only voracious critters that have been turning up in my garden lately. This summer I’ve found everything a gardener is supposed to get rid of–snails, slugs, mites, you name it–and dispatched them to their maker. 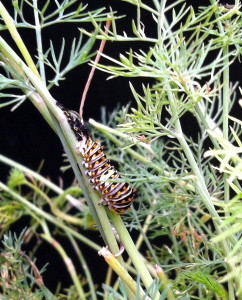 But today, I had to step back and listen to my dad’s whisperings. I was watering when a saw what looked like a black clump on a stalk of dill. I bent closer and saw that it was a black and white striped caterpillar with tiny orange spikes on its back (right). It had apparently just molted, leaving behind its earlier black skin, which is still visible in the photo. Instead of dispatching it promptly, I brought it inside still clinging to its stalk and placed it in a jar with a moist paper towel while I did some research.

Thanks to the website Gardens with Wings, I found that it is the caterpillar of the black swallowtail butterfly, which I’ve seen several times this summer without knowing what it was (photo, top left). And what are the host plants that the caterpillars prefer? Dill, fennel, parsley, rue. Bingo! 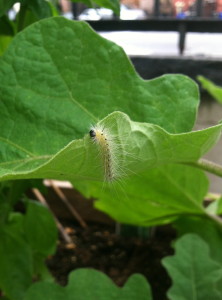 OK, even I am willing to give a caterpillar a break, particularly knowing that it’s a creature that I’ve actually tried to attract by planting butterfly bushes. How hypocritical would it be to attract the butterflies, then kill the caterpillars? I took the caterpillar back outside and gently restored it to the dill plant–glad that the dill has been disappointing this year, because that makes it less painful to submit my plant to the insect’s ravenous appetite. (Apparently, its only task at this stage of life is to eat enough to sustain it through its metamorphosis, according to About.com’s very cool post, “10 Cool Facts About Caterpillars.”) And now, perversely, I’m actually worried about the care and feeding of my caterpillar. Will it have enough food? Will it find a suitable place to form its crysalis? Will a bird snatch it up first? Sigh.

No sooner had I pardoned the black swallowtail caterpillar than I found this spiky white caterpillar (above left) munching the leaf of an eggplant. So who is he? Is he covered by my new butterfly protection plan? I ran inside to check and determined that he’s a fall webworm, a type of moth that’s classified as a pest. And he’s on my favorite eggplant plant! Let’s put it this way. The odds are not in his favor.

Now I’m fretting over whether my butterfly bushes will still be in bloom when my swallowtail emerges, since I now know that a butterfly garden requires both nectar plants for butterflies and host plants for caterpillars. How awful to have a butterfly emerge and find no food. We’ll just have to wait and see. In the meantime, check out this amazing video from YouTube on a swallowtail caterpillar molting.