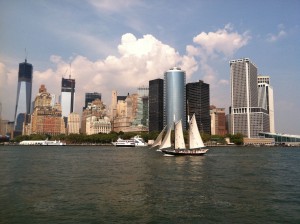 I know. This photo of lower Manhattan from the harbor doesn’t look anything like a garden. But nestled between the Staten Island Ferry terminal (on the far right) and the rising towers of the new World Trade Center (on the far left) is a remarkable farm. That’s right—a one-acre farm in Battery Park (where you see the rows of trees along the waterfront).

I was sprinting through the park to meet my husband one evening last month when I first laid eyes on it—a mysterious enclosure with a tall bamboo fence around it and vines spilling over the sides and between the slats. I made a mental note to come back. But how, I wondered, do you even get in? The bamboo fence appeared unassailable–and it stood in the middle of a large lawn, which in turn was surrounded by a chest-high iron fence. 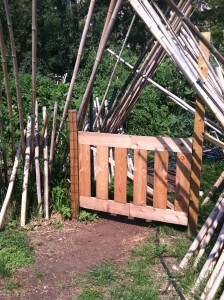 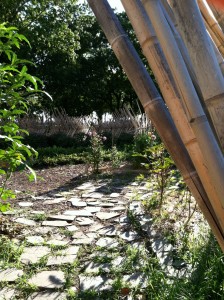 I returned that weekend and walked all the way around the lawn until I found a place where the iron fence was low enough to clamber over—then began circling the bamboo fence until I found a gate. I opened the latch. There, just steps from lower Broadway, not far from the Canyon of Heroes where we’ve all seen so many ticker tape parades, was a garden that looked as if it had been plucked out of colonial times. It had neatly laid paths snaking through row upon row of vegetation, from arugula and basil to Swiss chard and zinnias. 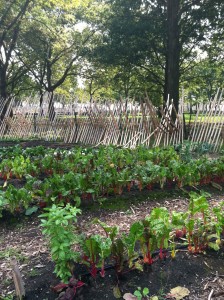 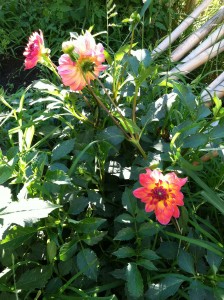 Perhaps most inspiring is that Battery Urban Farm, as it’s known, owes its existence to a group of eight high school students. In November 2010, these members of the Environmental Club at Millennium High School asked the Battery Conservancy if they could start a vegetable garden. The answer was “yes,” and in just a year, the project grew to encompass 11 schools and more than 800 students. (What awesome college-essay material the original eight must have!) 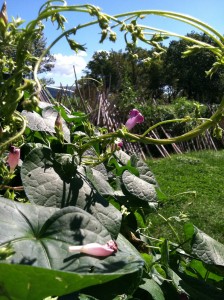 According to farm manager Camilla Hammer, elementary school classes come once a week in the spring and fall to dig, plant, spread mulch, taste and observe the prolific growth of 80 varieties of organically raised fruits, vegetables, herbs, and flowers. Even restless kids who can barely sit still in their seats enjoy outdoor lessons on pollinators, plant life cycle, and the farming traditions of the Native Americans and the Dutch who historically lived in Manhattan. Older students come, too, for classes like botany and drawing. Produce from the garden goes to a farm stand, school cafeterias, and even three local restaurants that welcome the farm’s more uncommon ingredients such as sweet potato leaves, lemon grass, and squash blossoms.

I’ve been back a couple times now to chat with the adult volunteers who actually keep the place going. And in the process, I got an entomology lesson of my own, when I stumbled across two monarch butterflies mating (below). Apparently, the monarchs can go at it for hours. When I drew closer to take a picture, they retreated to a higher branch. They flew together as a perfect unit, not even bothering to uncouple! 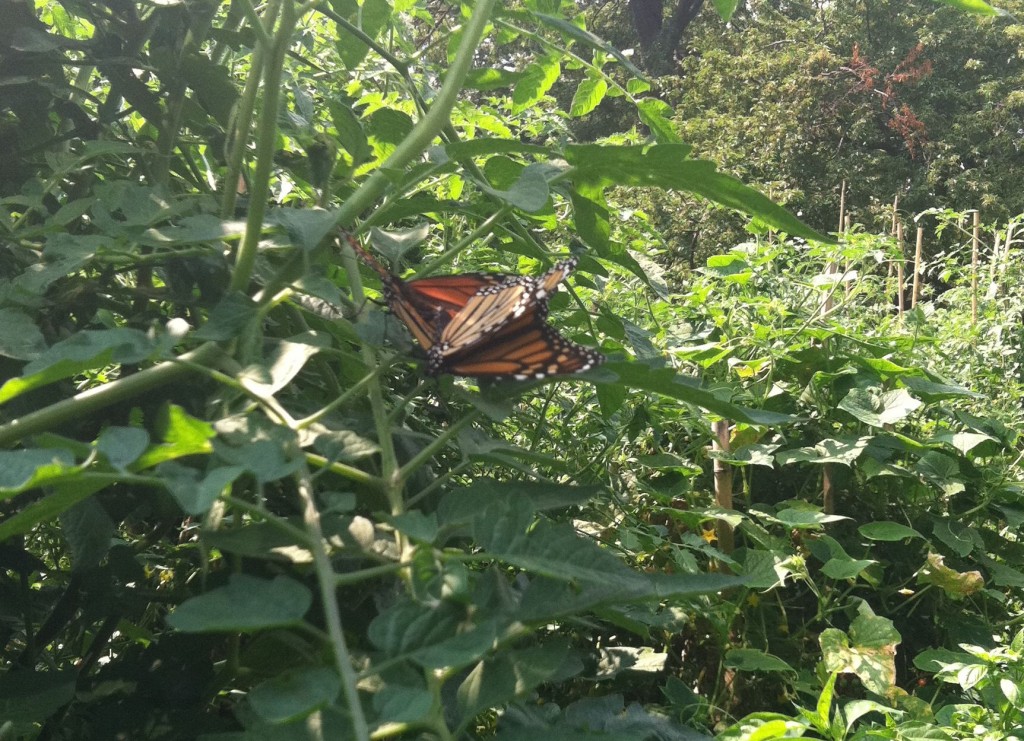