As they say, no good deed goes unpunished. When an adorable little black swallowtail caterpillar appeared one day on the late-summer remains of my dill, I dubbed him Pilly the Kid and began looking out for his welfare–making trips to the market to buy him fresh dill, and rescuing him after he wandered off and failed to find his way back to the dill in the morning. Then one fine day he wriggled into an inaccessible spot to form his chrysalis. I thought that was the end of my caterpillar nurturing days. Uh, huh.

The Friday before Labor Day, I came outside and found that mamma butterfly had been visiting my dill again, with surprising results. I ran off to buy a fresh batch of dill for the new arrivals, before emailing my neighbor, Jane, who had agreed to plant-sit for the holiday: “I know you only signed up for plant-sitting, not caterpillar-sitting, but ….” You can see the bundles of joy that mamma butterfly left, in this video I posted to YouTube.

Yes, I was adoptive mamma to six ravenous caterpillars, who rapidly grew into the guys you see here. If my first caterpillar was Pilly, these became the Dillies—Piccadilly, Dillsworthy, Dillard, Dill Pickles, Peccadillo, and Dilbert. (Just don’t ask me to make a firm identification of any of them.) Unfortunately, an early cold snap carried off two. I found their shriveled little bodies the next morning, after the temperature had sunk below 40 degrees. A third wandered off and never made it back. When I found him, the ants were already congregating around his tiny corpse. What can I say? The attrition rate is high in the insect world. So here’s how crazy I am: I went to the store and bought a fancy, vented lettuce crisper that was big enough to accommodate the remaining three Dillies and their container of fresh dill, so I could bring them safely indoors at night when the mercury plummeted.

When Piccadilly, Dillsworthy, and Dilbert were ready to form their chrysalises, I made each of them a separate container with a choice of sticks. Here’s Piccadilly stringing up, spinning the slender silk thread that will act as a sling, keeping him suspended from the stick when he forms his chrysalis. I watched, amazed, since the silk seemed to appear from nowhere–which is pretty much exactly what happens. According to Tampa’s Museum of Science and Industry, caterpillars spin the same way spiders do, secreting liquid silk from a little tube called a “spinneret” on the lower side of the mouth; then, as the liquid silk makes contact with the air, it turns into a solid filament. But how does a caterpillar do it upside down? And twisted into such crazy positions? 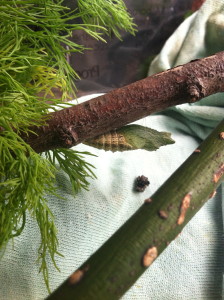 Roughly a day after stringing up, each one shed its skin, leaving the pupa underneath (photo, left; check out the discarded ball of skin on the bottom of the container). Each time, it was apparently a very quick process, since I missed it in all three cases, despite keeping their containers on my desk that day, so I could regularly glance over from my computer (a distinct advantage to working from home–don’t try this in the office).

All of which is very well and good. But one thing was bugging me. What would happen to my caterpillars if they emerged as butterflies a few weeks later, only to find that food was scarce and the season was too cold? How would they survive? That’s when I learned about “diapause,” the insect equivalent of hibernation. Metabolism slows, and their bodies produce a sort of “anti-freeze” to protect them. Every butterfly species has a stage of development in which it can enter diapause for winter survival. For some, it’s the caterpillar; for others, the chrysalis. In the case of black swallowtails, it’s the latter, so I have a long wait before I see any of my butterflies emerge. But thanks to Pilly, I know just where to put the Dillies for safekeeping in the interim. Pilly chose the ledge under the awning as the perfect spot for an overwintering caterpillar, so today I climbed up on the ladder and left the Dillies on this secluded ledge, where they’ll be protected from snow and rain, but can easily fly away when the time comes.

My husband has even named the new chrysalis commune. We’re calling it Pilly-delphia.

This entry was posted in Butterflies and tagged black swallowtail caterpillar, diapuase, silk, string up. Bookmark the permalink.