Wake Up and Smell the Dill

I bought a $30 salad spinner today—for my black swallowtail caterpillar. No, I’m not going to wash him and spin him dry. The large, clear plastic container (minus the inner spinner for greens) is the temporary refuge that I’ve outfitted for him—complete with bunches of fresh organic dill from the market, sticks to climb, and a towel hanging down on the inside to provide a caterpillar version of a rock wall for climbing. This may seem wildly eccentric, but I guarantee you, there’s good reason for it. 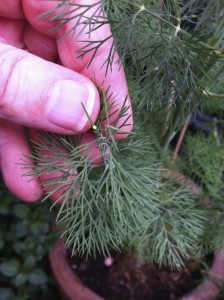 This has been a dicey year for my black swallowtail caterpillars. I’ve had dozens of female swallowtail butterflies visit my dill and parsley to lay their eggs (video, above). In a blur of wings, they alight momentarily, actually tasting the plant with their feet to make sure it will provide good food for their young. Then they flutter close again, curling their abdomens underneath, as if doing miniature crunches, and deposit a perfect little yellow egg on a parsley leaf or dill frond (left). 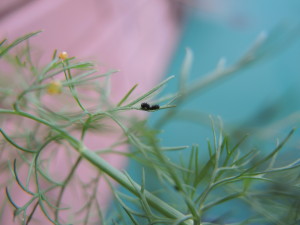 Within a week, the eggs will develop into tiny black caterpillars that seem like smudges of dirt unless you look closely. (The white “saddle” stripe around the middle is supposed to contribute to their camouflage, making them look to a predator like bird droppings instead of a yummy treat. Maybe.) 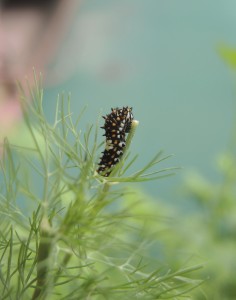 Several times in the coming weeks, they will shed their skin and grow—transforming into spikey little black-and-orange caterpillars (whose spikes apparently irritate the mouths of birds that may want to dine on them) before finally turning into plump, juicy green-and-black striped beauties that, despite their striking coloration, blend remarkably well with the dill. If you’re not looking for them, they could easily escape your notice, while they systematically devour the stuff. 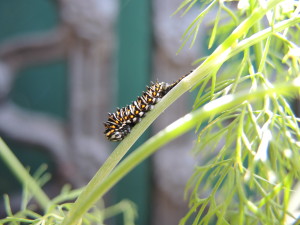 Of course, all of this presumes that they don’t first become a tasty meal for a parasitic wasp or fly. Both have apparently been out in force this year, as the attrition rate among my caterpillars has been horrendous. Week after week, I’ve counted dozens of eggs and caterpillars on the parsley and dill, only to have them disappear in the ensuing days.