The Secret Life of a Caterpillar 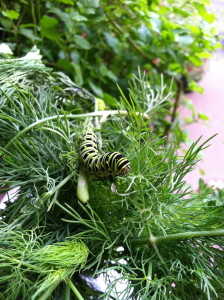 Suddenly, inexplicably, I–a confirmed
non-pet owner, who rolls her eyes at the endless stream of cat videos on the Internet–am now gaga over the little black-swallowtail caterpillar that’s taken up residence in my dill. Every morning, I come out and search for him, eager to reassure myself that my plump, juicy little caterpillar hasn’t become breakfast for a hungry bird. Sometimes it takes a few seconds to find him, as he’s perfectly camouflaged in the dill. But when I do locate him, I’ll usually sit for a while and admire his latest antics. 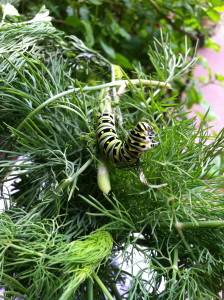 The longer I look at him, the more amazed I am by his agility. I love to watch him move around the plant, his lithe little body wriggling up, down, and across stalks. With tiny round legs, he clamps the middle and rear parts of his body firmly onto a stalk. Then, with what I can only assume are awesome core muscles, he arches his front quarters upward, sideways, downward, or in any direction that promises food. Yesterday he was hanging off the side of the dill pot. Today I saw him sprawled across stalks, his head swaying from side to side as if he were picking a corn cob clean. But his go-to, dill-devouring maneuver is to arch his body way back, enabling him to aim the tip of a slender dill leaf straight at his mouth. Viewed from the front, he looks almost like a plump little man with a hookah in his mouth (see video, below). 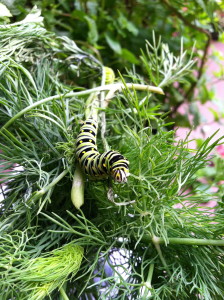 OK, I know it doesn’t pay to get too attached to an insect (Charlotte’s Web notwithstanding), but my husband and I have even given him a name–Pilly the Kid (or alternately, the Pillsbury Dill Boy). So you can imagine how worried I was three nights ago when I came outside after dinner to find that Pilly had disappeared. Thinking he’d exhausted the usable dill in my pot, I rushed down to the grocery store to fetch some fresh dill. But the next morning he was back, only to disappear again in the evening–and reappear the following morning. Where was he going? I was dying to know, so last night, I sat and watched him for over an hour. Around 8:15, as dusk descended, he climbed off the plant and onto the adjacent doorframe of the house. He inched his way around the corner and across the brick wall until he got to the big green awning above the dry cleaner downstairs. He spent the night hanging from the awning. Why? Is he seeking shelter from night prowlers? Is he testing the awning for chrysalis building potential? It’s hard to put yourself in the mind of a caterpillar.

Now, cat lovers, you can roll your eyes at my caterpillar video. But you’ve got to admit, Pilly’s kind of cute.

Related posts:
On my discovery of Pilly: Beetles and Snails and Mites, Oh My!
On the beginning of his metamorphosis: Metamorphosis Begins!

This entry was posted in Butterflies, Most popular posts and tagged black swallowtail caterpillar, dill. Bookmark the permalink.

4 Responses to The Secret Life of a Caterpillar