The Invasion of the Chiliheads 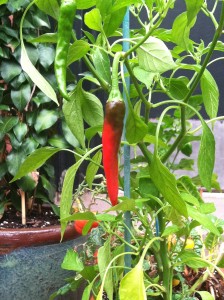 Plenty of new words have been coined in recent years, but only one of them as far as I know pertains to gardening—chiliheads. These are the firebrands who breed ever more scorching chili peppers in search of the most red-hot, heart-thumping, sweat-inducing chili you can imagine.

It wasn’t so long ago that gringos in the United States began spicing up their food with jalapeños—piquant little peppers that scored roughly 5,000 Scoville Heat Units (SHU) on the scale used to rate these things. Today those are mere entry-level chilis, strictly for beginners in the macho competition to breed (and eat) the most death-defying peppers. There is now a whole class of “superhots” that score above 500,000 SHU—including the Ghost Chili (1 million), 7-Pot Primo (named for its supposed ability to flavor seven pots of stew with a single pepper), Moruga Scorpion (wicked, at 2 million), and Carolina Reaper (grim, at 2.2 million SHU). As Lauren Collins wrote in The New Yorker, “Gastromasochists have likened [the Ghost Chili] to molten lava, burning needles, and ‘the tip of my tongue being branded by a fine point of heated steel’.” 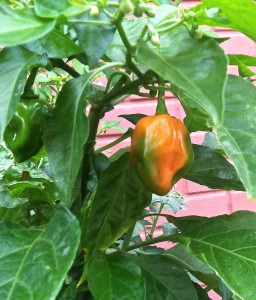 I have absolutely no interest in trying any of them. My husband and I are what you might call chili wimps, and with good reason. In my first year of container gardening, I grew cayenne peppers (photo, above) and habañeros (right). The former were lovely. The latter were lethal—well, almost. One evening, my husband innocently decided to toss them into the stir-fry. Immediately, the peppers unleashed a gas not unlike pepper spray that seemingly sucked the oxygen out of the room. He gasped for air. He turned off the burners and threw open the windows. No effect. He ran into the living room and still was struggling to breathe. (And habañeros rate a mere 275,000 SHU.) 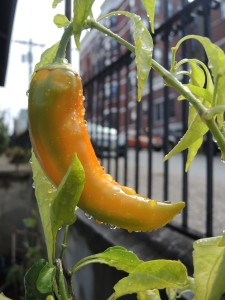 People who ought to know tell us that he wasn’t really in any danger and that the gas is no more dangerous than pepper spray. But since then, I’ve planted only nice, safe peppers that no one would dream of classifying as widow makers. This year I chose a docile heirloom variety, whose most dangerous attribute was its name—corno de toro, or “horn of the bull” in honor of its curved and pointed shape. It’s the largest of the sweet stuffing peppers. It’s lovely for roasting or chopped in gazpacho. And the hottest thing about it is the intense red color it turns when ripe. (This late-season batch still has a way to go.)

By the way, should you decide to brave a Carolina Reaper (or even a habañero), here’s your fire extinguisher—not water, but full-fat milk. The heat-inducing compound in peppers, capsaicin, is fat soluble, not water soluble. So keep a glass of milk handy, guys—even if it doesn’t do much for your firebreathing image.