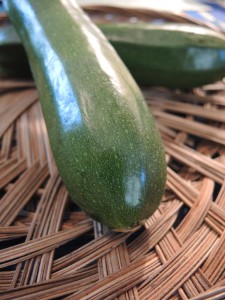 Zucchini is one of those plants that makes you feel like a successful gardener. Its mighty leaves create such a grand sprawl that you feel perfectly justified crediting yourself for the plant’s magnificence.

Better yet, it also makes you feel like an accomplished chef. It’s simple to chop and easy to cook, plus it readily takes on the flavors you mix it with. For years, my mother and I tried one zucchini recipe after another—ratatouille, zucchini bread, stuffed zucchini, you name it. But none was more cherished than our recipe for zucchini soup from the original edition of Mollie Katzen’s Moosewood Cookbook. “We like soup p. 24,” wrote my mother in the front—and though we modified it to suit our tastes (who doesn’t?), it remained a perennial favorite. 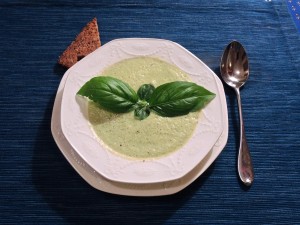 Last night I made it for dinner again, and it was just as good after all these years. But the real secret to its deliciousness isn’t the zucchini, which after all has little flavor. It’s the basil. “It should really be called basil soup,” my mother once commented. With an added sprig of the good stuff on top, what’s not to like? Sweet Genovese basil proves itself a winner once again. Sweet.