Wake Up and Smell the Dill 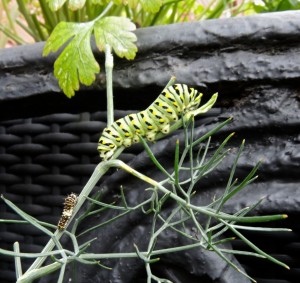 When two of them finally survived the gantlet of urban hazards, growing into large, handsome caterpillars, and I had high hopes for both of them. I had literally watched them grow up and was entertained by their behavior, including their systematic destruction of my dill. Like little gymnasts, they would twist themselves into all kinds of bizarre positions to get to the next tasty frond. On multiple occasions, they anchored their tail ends to a stalk of dill, then draped their front ends over a neighboring frond, curling their bodies up into a perfect horseshoe to grasp the end of the dill leaf—before proceeding to eat away the entire frond underneath them. If their back ends hadn’t been anchored to the stalk, they would have just sawed of the branch they were sitting on. 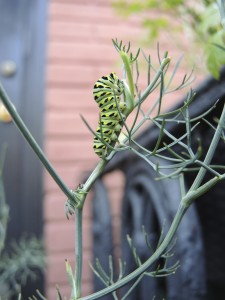 They were so cute, I even dared to give them names, christening them with two appellations I had used for my black swallowtail caterpillars last year—Pilly and Dilbert. (Yes, I know, it doesn’t pay to get too attached to an insect, but what can I say?)

Then yesterday I came out to find Dilbert gone. Missing. MIA. I looked all over—on the other container pots, on the steps, the wall—all the sorts of places that he might have wandered off to in his search for a place to form his chrysalis. But my search was in vain. Had a predator gotten him? 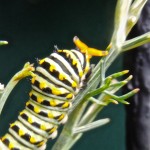 I decided it was time to take matters into my own hands and rescue Pilly, since Mother Nature was doing a decidedly poor job on her own. Enter the salad spinner. But first I had to transfer Pilly into it. When I cut off the stalk he was resting on, he showed no sign of alarm. He didn’t put up the Y-shaped, orange “osmeterium” (left) that he can stick up from the folds of his neck, when needed, to scare off predators. (Apparently, if you’re a bird, it looks like a forked snake’s tongue. At the same time, it releases a noxious odor that is apparently repugnant to birds, though utterly undetectible to me.) Pilly did none of that. Instead, he just lay perfectly still, perhaps believing that his excellent camouflage would fool me into thinking he wasn’t there. 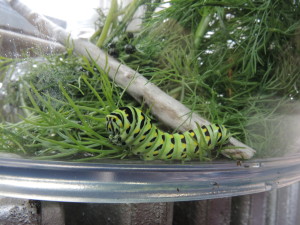 I carefully placed the stalk inside the container, alongside some fresh organic dill from the market, then put the lid on the container, but quickly began to wonder if he could survive the 90-degree heat outside. People lose dogs and even children to heat stroke when they confine them to hot cars. How much more vulnerable is a little caterpillar in a plastic container? (I hadn’t yet figured out that a piece of breathable, gauzy fabric makes a much better lid.) So my guy came inside with me. In the air conditioned apartment, he suddenly became much more active than normal during the midday, squirming all over. He climbed up and down his original stalk, then began exploring the new dill, exhibiting an appetite worthy of a peasant at a king’s banquet.

At the end of the afternoon, I went outside to water the plants and almost stepped on something lying on the top step—Dilbert! His apparent search for a place to form his chrysalis had been unsuccessful. He looked dehydrated and exhausted in the sweltering late-afternoon sun, so I picked him up on a chopstick and carried him inside to join Pilly in his mini wildlife sanctuary. I sprinkled some water on the dill and the bottom of the container. He drank what he could before collapsing. By morning, he hadn’t moved, and I’d more or less given him up for dead. However, Pilly seemed very well indeed and was exploring the container in search of a place to “string up” and form his chrysalis. 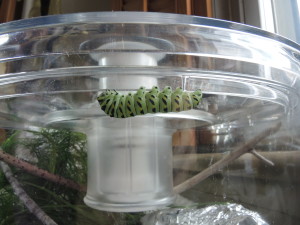 For six exhausting hours, he harrumphed around the container, exploring his tiny world. No longer interested in eating, he abandoned the dill and began climbing right up the sides of the clear plastic container. As he went he appeared to be practicing his silk spinning technique, leaving a tracery of tangled silk behind. Then much to my amazement, he latched on to the plastic lid and tried it out as a place for stringing himself up. “No, Pilly, the sticks. Go for the sticks,” I urged him. My consolation was that at least he was inside, rather than baking in the brutal sun, as Dilbert had done yesterday. 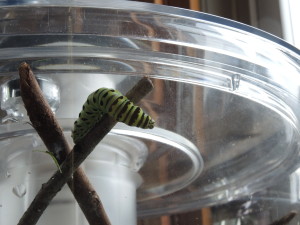 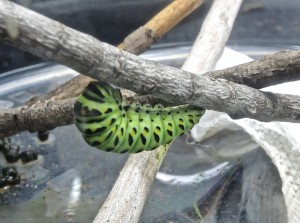 He then began slowly and methodically spinning a little sling to hold his body to the stick. He tucked his head through the loop and curled his front legs toward his head, much like a kitten with his head tucked next into his paws.

Meanwhile, Dilbert was too exhausted to string up, and I really didn’t think he was even alive any more. Throughout the day, his plump skin had become drier, coarser, and less colorful. Then the most amazing thing happened. That evening, he began twitching as if having convulsions. Fifteen minutes later he’d cast off his skin, revealing the chrysalis that forms underneath. 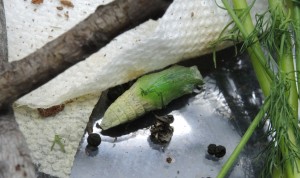 Pilly would shed his skin the next afternoon. I prepared to see what would happen next…