Wanting to keep the light and temperature as natural as possible, I tried keeping their gauze-covered container outside. But this proved to be a mistake. One night the temperature sank into the mid-60s. The next morning, caterpillars that had been big and juicy the night before appeared small and shriveled. Two of them looked dead. The third I held out only modest hopes for.

All three ultimately managed to form their chrysalises—though all of them by somewhat unorthodox methods. One of them simply formed his chrysalis on the bottom of the container without stringing up. My husband proceeded to glue the chrysalis to the underside of a stick and string it up for him. The second actually decided to string up on a paper towel I’d placed in the container! Watch how he forms his sling, then pokes his head through and tugs on it to make sure it will hold.

When the towel started sagging after several days, I tied it around a stick, so he, too, would be strung up.

But the third one actually taught us something about black swallowtails. He strung up on a stick as he was supposed to, but was then unable to shake off his old skin properly. The video shows how he writhed about until finally able to shake it off. 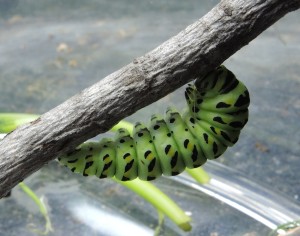 After this, he hung there, dangling by his sling for a couple days. We had expected him to reattach his tail end to the stick, but he never did, so my husband decided to glue it for him. But when he pressed the tail to the stick, it clicked into place with no glue needed. Suddenly something clicked into place in my consciousness. I had watched these caterpillars prepare to string up with their heads at the higher end of a stick—then after 20 minutes or so, curl themselves into a perfect horseshoe and reverse their position, so that their heads were now pointed to the lower end of the stick. There they would bob their heads up and down as if examining something—then curl their bodies back into a horseshoe and reorient themselves the first way, with their heads pointing toward the top of the stick, before spinning their slings to string up (left). I had thought they were just testing out different positions. But what they were doing was weaving a miniature hook to hold their tails. I had always wondered how their tails stayed attached to the stick. Now I know.

In the end, I am proud to say, all three of my caterpillars formed perfect, beautiful butterflies. So while I may have rescued only a tiny fraction of the caterpillars in my garden this year, the Caterpillar Rescue League has accomplished its modest first goal. 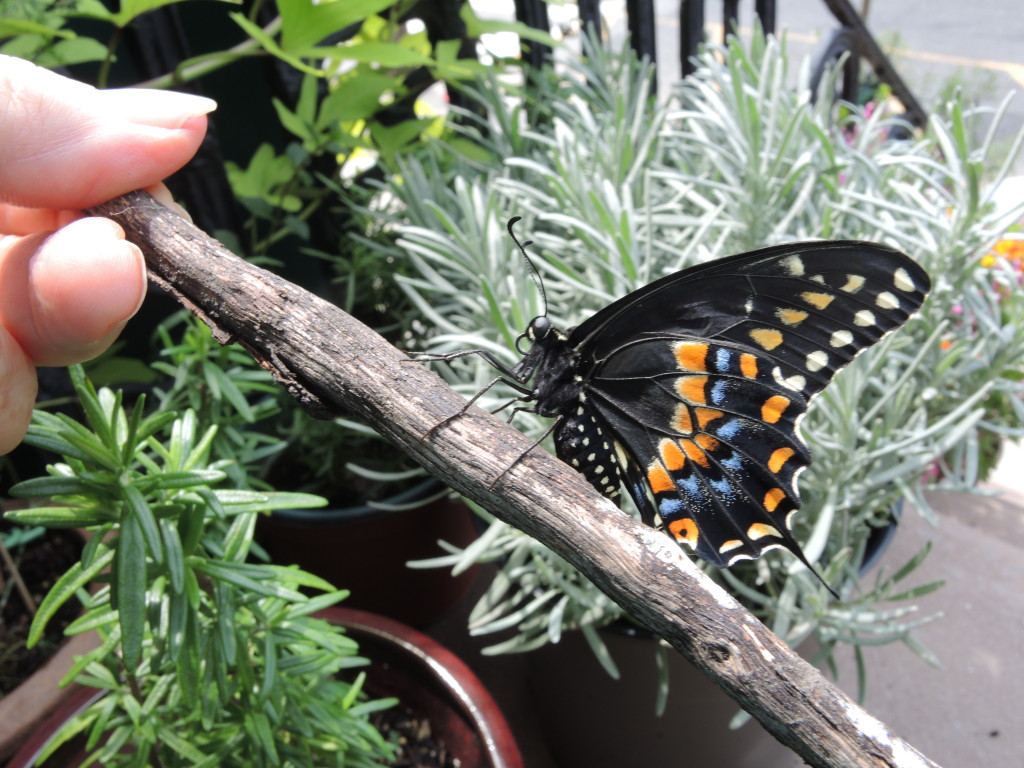 Pages: 1 2
This entry was posted in Butterflies and tagged black swallowtail, caterpillars, rescue. Bookmark the permalink.